Labour Party of Kenya (LPK) Ababu Namwamba has endorsed his Organizing Secretary Peter ole Musei to run for Kajiado North Member of Parliament seat. Ababu who opened LPK Kajiado County Branch headquarters offices in Ngong, said Musei is the right person to vie for the seat as he has excellent leadership skills. Namwamba’s party had organized a roadshow in Embulbul, Ngong, Kiserian and Ongata Rongai to popularize LPK and the party candidate. The Budalangi MP who decamped from ODM, said Labour Party will identify a presidential candidate to support in the August 8, 2016 General Election, adding that party will also field a candidate in Kajiado West constituency. Musei who decamped from Orange Democratic Movement after what he said was unfair party election, said his campaign strategy is to unite residents and bring development in the cosmopolitan constituency. He said he is the right candidate to unite the residents as he is neither in Jubilee nor Cord, adding that the region needs a neutral candidate. Musei who used to chair National Council of Non-Governmental Organization (NGOs) and who is Director Pastoralist Concern Education Foundation accused sitting MP, Joseph Manje of failing residents saying roads are in pathetic situation while the MP is giving empty promises. He accused the seating leaders of not creating jobs for the youth and promised to work with the youth to generated job opportunities. “Why should we have more private schools than public schools in Kajiado North?” he posed. 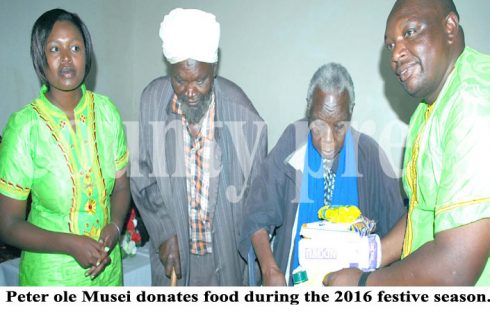 He promised deal with the education matters by equipping institutions in the constituency. Musei who holds MBA in Strategic Management from the Kenya Methodist University and a Master’s degree in Education (Research and Evaluation) from Catholic University of Eastern Africa also promised to focus in dealing with garbage menace in the cosmopolitan towns Ongata Rongai, Kiserian and Ngong which have been left unattended for long. He said he will clean the towns to attract new investors and solve traffic jams in the towns by upgrading roads and opening feeder roads. In the festive season, the politician offered food to hundreds of needy people in Ongata Rongai PAG Church in Kware to celebrate Christmas and New Year. He called on the locals to elect a God-fearing leader to steer them greater development. The attendees including the church pastors endorsed him for the seat and they called on worshippers to elect people who will unite all communities.

One thought on “Musei endorsed for Kajiado North MP”