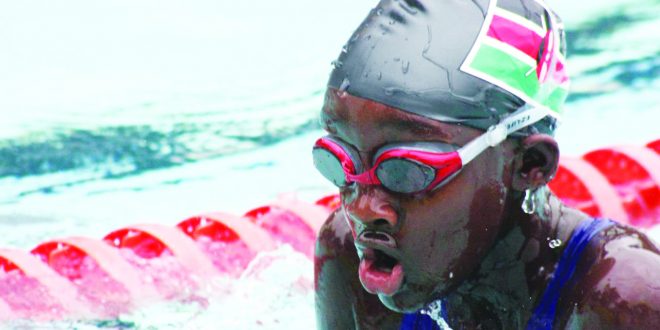 When Lanoi Leperes Naikuni started swimming at the tender age of two years. No one thought her passion for the sport would make her one of the best young swimmers in the country.

The class six pupil at Olerai School in Kiserian, Kajiado County is now a guru in swimming; she has won a number of medals in Kenya and outside the country.

She says that she was motivated by her brothers, Lemeria and Leintoi who are now 16 and 14 years respectively who are good swimmers. She says her passion enabled her to learn fast and now beats her brothers. Her parents Mr. and Mrs. Lucas Naikuni have been very instrumental in encouraging and supporting her swimming ambitions. The 11 year old started participating in school swimming competitions while in nursery school.

“I would like to be the best female swimmer in the country and take part in international swimming championships, am trying to do my best,” she says.  She trains at Brookhurst International Schools along Kiserian Isinya Road, three times a week during school days and two hours per day during holidays.

Lanoi says she was not swimming perfectly until her parents noticed her love for swimming and approached a coach when she was 7 years to train her professionally.  The coach taught  her the importance of the sport. This saw her compete in several swimming competitions in the country.

Before travelling to South Africa, she participated in Nairobi County – Kenya Swimming Federation Level 1 championships held at Makini School in February 2019, winning gold medals in 200, 100 and 50 meters breast strokes; and silver and bronze in two other strokes in the same event.

She participated in Swim Africa Skills Development Galas from 2015 to 2017.  In June 2015 she was 2nd runners in the 7-8 years age group competition. In February 2017, she took 3rd position in 12 metres breast stroke.

She has also won medals in different school athletic competitions.  This year, she represented her school in Kajiado zonal athletics competitions in 100 metres and 1X400 relays.

Her role models in the world of swimming sports are the Dunford brothers and Katie Ledecky who is one of the best female swimmers in the world and she wants to emulate them.

Professional swimmer Daniel Mutuku who has been coaching her since last year told County Press the girl is talented in swimming; she has a passion in the sport and is self-driven.

Mutuku says she has been locked out of several competitions because of her age, but her times are better than other competitors who participate in the events.

Her times compare with the national team swimmers who are above 14 years,” he noted.

He said that they are expecting her to compete in Commonwealth Junior Championships, African Games and World Junior Swimming Championships, her ambitions are high.

She is now preparing for Kenya Swimming Federation season events of this year and Africa Level 3 championships in April 2020.

Mutuku says the challenges faced by swimmers in the country include lack of affordable training facilities.

“There are no public swimming pools and the swimmers have to pay high prices to train at privately owned pools’’, he said.

He noted that the swimming sport is growing very fast in the country and the National Government; and County Government of Kajiado ought to prioritize the development of sport facilities to give opportunities to children and youth to grow their talents.