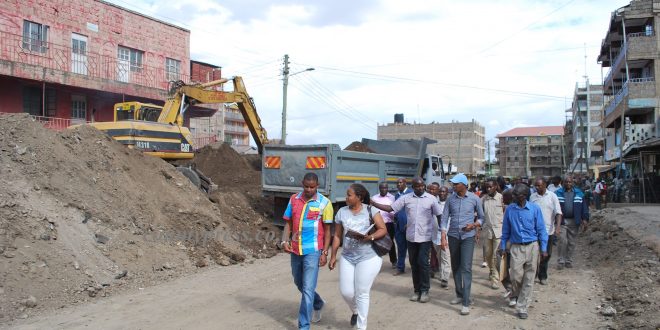 The three roads include Ongata Rongai Ward Kobil Wama road which is 1 km.

The road will be tarmacked and streetlights erected to ensure businesses operate 24 hrs. It will be completed in 6 months’ time.

Health officers were directed to use the chance to dismantle pipes connecting sewer water to the roads.

Rongai resident Samuel Maina said contractors must provide the bill of quantity for the residents to monitor the work.

Residents had questioned quality of work done in Rongai Ward Road, they had written to several authorities to investigate and ensure the work is done according to set standards.

The municipality manager George Kuubai called for a meeting with the contractor and Kajiado engineer and said they will monitor the work that is expected to cost Sh70 million.

Another road funded by the World Bank is Kiserian Primary Road in Olkeri Ward. The 1.4 km road will cost around Sh55 million.

The third road that is to be tarmacked the Kobil to ACK church road in Ngong town. The road will cost sh 55 million it will take six months to complete.

The manager said the road will open up the roads network in the municipality.