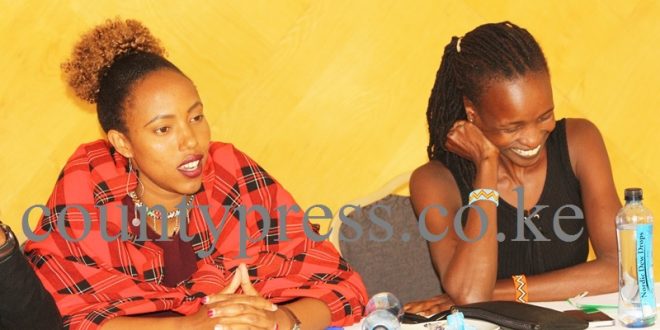 Evah Naisimoi [left], one of the youth champion who has come out to fight for anti FGM, early marriage and teenagers pregnancy.Photo Michael Opiyo

Even after introduction of legislation against Female Genital Mutilation through an Act of Parliament that took effect on October 4th, 2011 and the despite the fact that Kajiado County Assembly in 2015 supported the move, Kajiado West  is still hotspot in region affected by FGM, early marriage, high school drop outs and teenagers pregnancies.

A section of the community in the sub-county still forces young girls to undergo female genital mutilation, an outdated cultural practice. Those circumcised fall prey to early marriage or teen pregnancies and drop out of school. This has prompted many activists to call for a stop to the retrogressive practices.

Non-governmental organizations are the most active in such activities and seek to safeguard child education and sensitization of locals to end the practice before 2030.

The government stated its stand to support the initiative of anti FGM campaign by assuring people and stating its during the Women’s Delivery Conference in Canada.

“It’s worse when one realizes certain chiefs and elected leaders condone the  outdated practices to secure votes or gain political mileage. Some chiefs are being paid to do this,” noted Evah Naisimoi,24, from Ewaso, one of the youth champions fighting FGM, early marriage, teenage pregnancies and  rising school dropout rate.

“As youths from Kajiado West, we have come out to speak with one voice, enough is enough and things have to change. But change never come easily, some will accept while many will not accept it,” she added.

“The way-forward is to create awareness among women and fellow girls to realize their role and dream in the future life. We want to transform the community through training and with support of the parents and organize forums and workshops to for youths,” she said.

“ We intend to visit every learning institutions more so primary and secondary schools,” she noted.

“In addition to that, the champions will visit every homestead to ensure the girl and boy child that requires to be in school does so,” stated Evah who is undertaking Community Health course at Catholic University.

Jennifer Lenkoi another champion in the anti-FGM campaign applauded Network of Adolescent and Youth of Africa – NAYA, a Non-government organization that has come out vigorously to persuade and eradicate outdated cultural practices in Kajiado West Sub-county.

The organization has identified 20 youth champions and offered to train them to sensitise the community on side effects of the outdated cultural practice.

“I went through FGM but it took a lot of my time of study. It mostly take 5 to 6 months depending on one’s health. However, I never give up in life and appreciated my parents for their support on my education and currently I am taking a course on ECDE at Sacred Heart Kiserian,” she noted, adding that she will not allow any girl-child to undergo the same situation.

“Among the champions, we want to be the role model to fellow girls because youths are in better position to play better role models to bringing real changes in the community,” noted Jennifer during an interview with County Press.
“I will apply the knowledge gained to pass the message in schools and parents’ meetings that will be held in schools to fulfil our mission and bring down to zero percent the outdated culture practices that have many side effects,” she noted.

“We will be showing the videos in learning institutions, chief’s barazas, youth forums, meeting places and market days fora to convince youth to support us,”Jennifer explained.

According to Domnic Mamboleo, the Programme officer of NAYA, in complimenting Yes I Do Alliance project in Kajiado West, a survey conducted in  the year 2016 indicated that Kajiado West in Kajiado County has been the worst region affected by outdated cultural practices such as early marriage, teenage pregnancies and FGM.

“NAYA is targeting the young generation which forms about 60 per cent  of the Kenyan population. They can play big role in Kajiado West and that’s why we empower youths in the 4 wards to spread the message to be our ambassadors,” he said.

They highlight the side effects and diseases that may result from FGM such as haemorrhage from the dorsal artery, shock then infection, urinary risk and tetanus which may lead to mortality, he explained.

Mamboleo said some girls end up losing life like a recent incident that happened in Narok County. Others may be at risk of HIV transmission, infection as well as complications in childbirth and increase risk of newborn death.

“In 5 years down the line, there’s more impact on the initiative and many have changed and understand the consequence on the outdated culture practices,” he added.
Robert Aseda, echoed his point and urged the young generation to transform the community.
County Press has learnt that currently 6 girls are reported pregnant in form 2,3 and 4 in Kajiado West area. And due to that teachers are now appealing for more Boarding schools to reduce the number of teenage pregnancy and early marriages.

County Press has also established that most of the elected leaders and chiefs do support anti-FGM, early marriage sensitization on social media but on the ground some condone it.

Peter Rampei one of the champions in NAYA and among the youths fighting and championing anti FGM said: “As youths we shall use social media as media advocacy and such avenues as WhatsApp groups, Facebook, twitter, website, newspapers, booklets and all the media companies to post the risks posed by FGM.

In Kajiado West Sub County, currently learning institutions in the region are upgrading by establishing rescue centres and primary schools with boarding facilities that offer food to motivate the children to attend classes in remote areas.