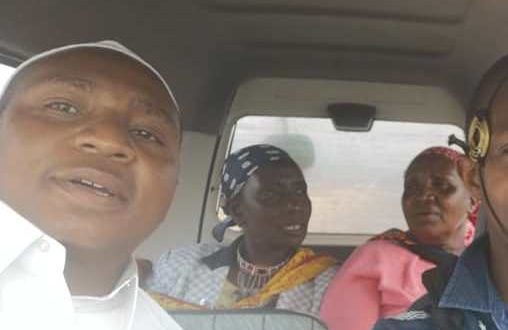 Nominated MP, David Sankok being driven by a young boy

Video of Sankok being driven by child draws mixed reactions

A Facebook post by nominated Member of Parliament David Ole Sankok of a child driving him and other four passengers has drawn mixed reactions on social media.

The MP and posted a video in his Facebook page with comments that children to be given an opportunity to unleash their unlimited potentials.

“I support the Competency Based Curriculum (CBC) because it will unleash the talents of our young ones who for a long time have been denied driving and aviation licenses and other technical duties when they are under 18 years of age,” said Sankok.

He claimed that in his youthful days, his parents entrusted him with the task of moving cattle from Kenya to Tanzania in search of pasture at the age of 10 and together with other boys, they built their own house in the jungle.

The MP who hails from Narok County then invited the public to comments.

“How can you proudly display underage driving? This is terrifying and very disappointing,” Pancwise Gamgee posted.

Veronica Irungu Mhesh asked the MP if the child has a driving license but the MP defended his  actions  by replying:  “Because  they are 12, 13 or 14 years old, it doesn’t mean they are stupid. That is why we support CBC to unlock and unleash the hidden abilities of our young ones.”

David Thengereri complained that the MP was risking the lives of other road users by giving a vehicle to an unlicensed minor.

But others defended his actions, among them Hunter John Ole Keko who said he used to drive at the age of12 years.

According to NTSA rules, one should be 18years and above to obtain a driving license and to train as a driver.