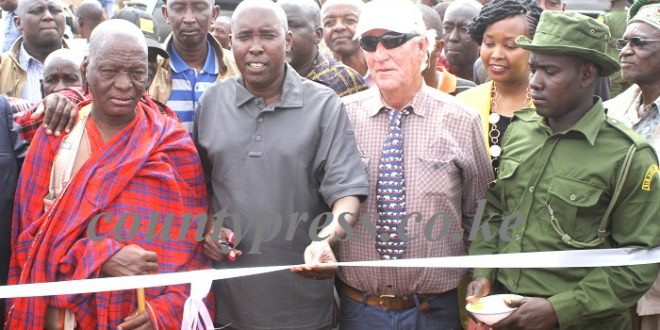 Human- Wildlife conflict cases are set to reduce following the construction of a 75km long electric fence along the Kenya -Tanzania border.

The fence, currently under construction, is funded by by a non-governmental organization called Big Life Foundation at a cost of Sh100, million.

The project was commissioned at Kimana in Oloitokitok Sub County by Kajiado Governor Joseph Ole Lenku and the founder of Big Life Foundation Richard Bonham.

It will be a big relief to thousands of residents including farmers whose lives are endangered by wild animals sharing with them scarce resources like pasture and water and also because they live next to an elephant migration corridor.

Speaking during the event, Lenku said many people have been killed or injured and crops worth millions of shillings destroyed by rogue elephants and roaming lions.

‘’Human Wildlife Conflict is a big problem because it has claimed many lives and so this particular project will not only help save lives but also crops from destruction,’’ said Lenku“

The Governor had recently threatened to mobilize the Maasai community to kill stray wild animals that invaded their farms, if the Kenya Wildlife Services (KWS) fails to compensate livestock owners and families for loss of animals and deaths of herdsmen.

In a statement that caused tension between his government and the National government, Lenku said KWS had always taken advantage of the Maa community’s protection of wildlife animals for granted and without any appreciation.

The Governor complained that almost all sub-counties in the region had been affected by human-wildlife conflicts all the year round, yet no measures had been taken to protect the endangered population.

He said: “We are relieved that the electric fence is now in place but my message is that all wild animals should always be confined within the parks for Kenyans to appreciate their economic importance but not when they are killing people and trampling on their property.”

Echoing the governor’s sentiments, Bonham said conflicts between people and wildlife currently ranks amongst the main threats to conservation in Africa.

He gave an example of Kenya, where most of the wildlife wander outside the protected areas, making enhancing and sustaining co-existence of wildlife and people a big challenge.

‘’It  is undoubtedly evident that the expansion of human habitation into parks has forced people to infringe on wildlife habitats and convert land to other uses which is a threat to wildlife,” said Bonham.

He said such conflicts negatively impact on both humans and wildlife and asked conservation agents to deal with the problem which is now critical in establishing sustainable conservation systems.

He said the construction of the electric fence would establish a hard boundary between farms and hungry elephants, although approximately 120 km of fence was required, which is a daunting task.

Recently KWS said it had put in place elaborate measures to mitigate a surge of human-wildlife conflict cases in Kajiado County and other parts of the country that were increasing.

They were reacting to an incident in June, where two people were killed by marauding elephants in Merueshi area of Kajiado East Sub- County.

“In the case of Meruishi incident, the Problem Animal Management Unit (PAMU) supported by a multi- agency team from the County administration managed to drive the elephants back to Chyulu Hills National Park,” KWS said in statement .

Responding to Governor Lenku’s statement, they appealed for calm and requested the community swiftly alert KWS officers in their respective localities whenever they sight stray wildlife.

The KWS said they were in the process of disbursing funds availed by the Ministry of Tourism and Wildlife to pay families of people unfortunately killed by wildlife after due process and verification had been done.

Previous Court nullifies nomination of Kajiado MCA, seeks appeal
Next Crime on the increase in Namanga