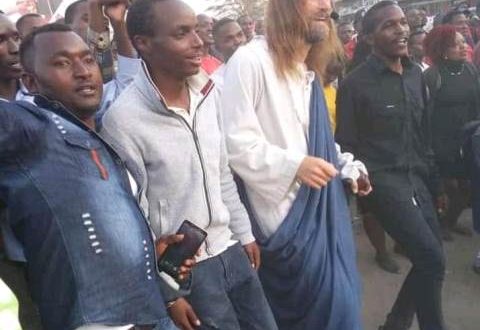 There was chaos in Ongata Rongai in Kajiado North Sub County on Sunday evening after police teargassed worshippers of Mega Harvest Healing Crusade hosted by an American evangelist.

The Rongai police officers had invaded the crusade and switched off sound system accusing the organizers of failing to comply with noise regulations.

Chaos started after the switch off, the believers ignored the orders and continued worshipping forcing the police to throw teargas in the middle of prayers.

The American evangelist Michal Job who has been described as Jesus Christ look-alike was teargased before rescued and hurriedly driven away as hundreds of worshipers scrambled to safety.

During the chaos the evangelist recorded live video on his social media account calling people to pray for them, he said when police turned off the sound system they continued praying before bullets fired into the air and more teargas thrown,

“There are more than 200 people who got saved in the midst of the chaos, never run away from the devil, they shot in the sky but we continued preaching, God Has victory I can’t wait for another crusade,” he said.

He said they had all the permits and the crusade cost thousands of dollars. He said the incident will not stop him from spreading gospel.

Pentecostal Faith Ministries Rongai Pastor Timothy Mwende said they had  all permits and the police took away the documents after shutting down the crusade, he said he suspect there is a person against the crusade, he said the meeting was supposed to end at 7PM but police forcefully  shut it down around 6PM. They had also switched off the sound system on Saturday evening before the Sunday chaos where two people were injured.

Mwende said they have been holding the crusade in the area yearly; the team is now in Kitengela Kajiado East Sub County in another crusade.

Efforts to get a comment from Kajiado North police boss was unfruitful, our calls went answered.