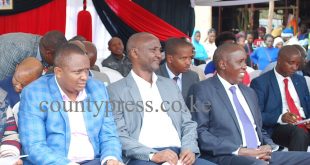 On the Monday meeting Raila ordered the politicians to put aside their personal differences and present issues that affect the community in a harmonized report to be considered in BBI.

The ODM party leader ordered the teams to present their proposals to be harmonized a head of BBI rally to be held on 22nd  February in William Ole Ntimama/Narok Stadium. Cabinet Secretary for Environment Keriako Tobiko is the secretary of the teams.

There will be delegates meeting on Friday for harmonization of the proposals and preparation of Saturday rally.

Governor Lenku will remain chairperson of the South Rift region, he will co-coordinate the BBI campaigns in the regions.

Lenku had also attended BBI meeting in Nkoroi, Kajiado North Constituency where residents were given a chance to present their proposals.

Area MP Joseph Manje said the opinion leaders had proposed to have communities share top leadership positions in the county level, they proposed those seeking for gubernatorial positions to have other communities as their running mates.

“They proposed if governor is from Maasai community the deputy governor should be from another community, there should be equitable distribution of resources,” he said. He told off senator Ledama who he accused of dividing the people of Kajiado, the senator had said the MP cannot articulate Maa issues.

The locals also proposed population of the region to be used in sharing of county resources and more personnel and resources be channeled to Municipalities. The county has been allocating equal funds to each Ward.

The attendees also proposed for official languages to be used during public and official meetings. Those born in the county should also be considered as indigenous community.