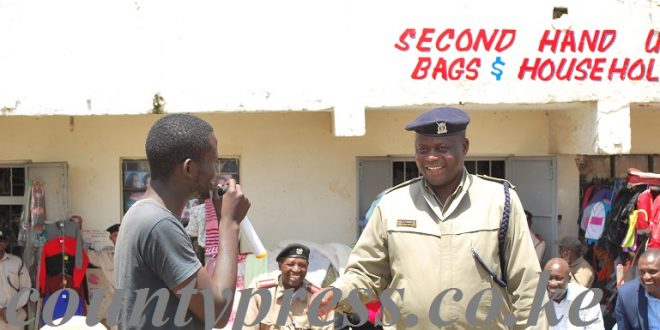 A youth explains to Rongai OCS Amos Shamala why bhang should be legalized. The OCS said he will arrest peddlers and smokers of the illegal substance. Photo Obegi Malack

Ongata Rongai OCS Amos Shamala has warned a gang that has been terrorizing residents in the town, the OCS said he will deal squarely with the gang based in Kware and around Rongai.

“There was one who we dealt with, parents should question their children on how they acquire the items they possess,” he said. The gang has been attacking and robbing residents at night.

Shamala who was speaking during a public meeting in Kware said he will deal with the youth who carry dangerous weapons at night. He said victims should call the police immediately when they face them but not on social media.

The OCS who is now Nkaimurunya Ward commander in the new structure, also warned marijuana peddlers and smokers in the town, he said police will deal with those caught smoking the illegal substance.

Numbers of smokers has increased. Most of those involved in robberies are bhang smokers.

Nkaimurunya MCA James Waisha said the county will upgrade the Soko Mjinga  market by providing murram to repair impassable sections  of the market to allow easy access, he said the traders should also pay revenue to the county.

The market chairman James Gachie said the traders will pay revenue when the county government has fulfilled the promises of upgrading the market.