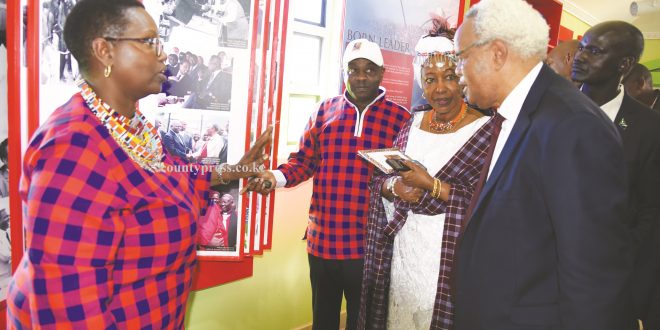 Anytime the name of the Maa maestro William ole Ntimama is mentioned, memories of a hard-liner, an astute community rights advocate and an orator come to mind. And despite his passing on two years ago, his spirit lives on through his no-nonsense daughter.

His daughter and political heir Lydia Naneu Natimama-Masikonte, who popularly identifies herself as entito orkingi  which loosely means the daughter of  a king, seems ever-green ahead of 2022 even after losing the woman representative  seat  bid twice.

The charming lady, in the last general election took many by surprise when she ditched her father’s wish party, Jubilee for Bomet Governor Isaac Ruto-led Chama Cha Mashinani (CCM) after turning down Jubilee’s proposal of her vying for her father’s constituency-Narok North seat.

Following the recent political developments where the current woman rep Soipan Tuya-Kudate has been rumoured to be contemplating running for the county’s gubernatorial seat, Ms Ntimama now seems to be getting a major boost.

Lydia who had contested for the area Woman Representative position in 2013 on an ODM ticket and lost to the incumbent Tuya had expressed concern over lack of transparency in the party’s nominations.

Since the time Ntimama asked the Maasai to support Jubilee, President Kenyatta has maintained close contacts with the family and recently Ntimama’s elder son Amos Ntimama was appointed as the Chairman of the Private Security Regulatory Authority.

“I was taken to Jubilee by my father but upon reaching there, I saw a ‘monster’ and I had to retreat. Iam now in CCM and this is where I will fight for my community from,” Lydia noted in one of the political events.

Ntimama’s only daughter is not new in politics and leadership as she has once served as a nominated councilor in the defunct Narok County Council and has also sat in the Rift Valley Water Service Board as a member.

Lydia said a section of Jubilee leaders attempted to force her to cede her quest for the Woman Rep position in favour of the incumbent Soipan Tuya and instead asked her to run for Narok North parliamentary seat against her wishes.

“They (Jubilee) told me that they wanted someone who was loyal and non-controversial for the Woman Rep position. It was then that I came to realization of the Swahili saying: Akufukuzaye, hakuambii toka (whoever doesn’t want you can’t chase you out directly) and I quit,” says Lydiah.

She said her heart was for the Woman Rep position which, she says she wanted to use to empower the women in the county economically as that was her passion. But her anxiety over fairness in the JP primaries also contributed to her bolting out.

Ms Ntimama was, however,  quick to clarify that she harbored no grudge against President Uhuru Kenyatta, adding that the family still supports his second term bid in respect of their late dad’s wishes.

“Jubilee and Uhuru Kenyatta are different. It should be known that I support him and we are indebted to him as was our father’s wish,”she  adds.

On why she chose CCM over other parties, Lydia said the party’s ideologies of improving the lives of the downtrodden residents at the grassroots level resonated well with her aspirations.

A few weeks before he died  on September 2, 2016, the Maa maestro William ole Ntimama led a delegation to State House, met President Uhuru Kenyatta and declared a mass exodus from opposition ODM to Jubilee.

A week later, President Uhuru and Ntimama met at thanks-giving ceremony of the then newly-appointed Geothermal Development Company (GDC) MD Johnson ole Nchoe’s home where Ntimama assured him of the Maa support.

Owing to his influence in the Maa-speaking counties such as  Narok, Kajiado, Samburu and Laikipia, his political direction was highly respected by the community and on that, Jubilee was the party to support but his own daughter made her choice to vie for  a seat on CCM ticket.

Previous Audit government buildings for disability-friendliness: MP
Next Ngong market committee to be disbanded after accusations of bribery