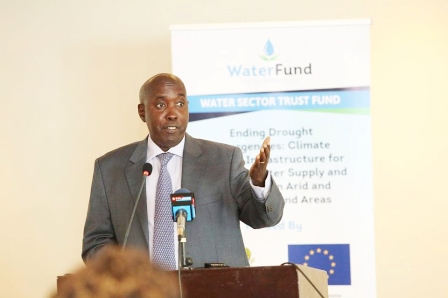 Leaders, who spoke during the homecoming of Imaroro Ward MCA Amos Peshut, told Lenku the people of Makueni have coexisted with Kajiado residents since time immemorial.

Speaking last, after Wiper leader Kalonzo Musyoka, Makueni Senator Mutula Kilonzo (Jnr.) said he is perturbed that Governor Lenku is quoted as saying only excess supply of Nol-Turesh water will be allowed to flow to Makueni.

“This water comes from Mt. Kilimanjaro, and our people have been sharing the same with Kajiado. It is wrong for Kajiado governor to insinuate that he has no regard for our people and yet we have been assisting them with grass during drought,” said Kilonzo in Kiloh Village of Kajiado County.

“I have been in the forefront in agitating against issues affecting the Kajiado Maasai people in the Senate, and even supported you to get equalisation fund because you have been marginalised for many years.”

His sentiments were echoed by Kilome MP Thaddeus Nzambia, who apologised to Kajiado residents over an incident where Maasais were assaulted early in the year in Konza over grazing in their land.

Kilonzo, on other issues, told President Uhuru Kenyatta to work closely with Kalonzo and ODM leader Raila Odinga in fighting graft in the country.

The homecoming of Peshut was the largest ever to be attended by more than 5, 000 people in county.

Peshut also caused laughter when he introduced his family to the guests saying he is married to a female and God had blessed him with three children.

“Your Excellency let me declare here today for the people of Imaroro that I am married to one wife who is female, and we are blessed with three children,” concluded Peshut of Wiper Party.

Previous Lupus , disease that causes body to turn against itself
Next Uterine fibroids treatable with no dreadful surgery