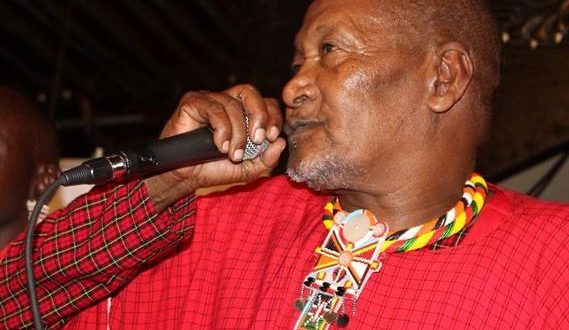 Daniel Saningo ole Pakuo, is a household name among the Maa speaking people of the Rift Valley region because of his popular gospel music that has been acclaimed for promoting the Maasai culture.

The re-known soloist is so popular in Samburu, Kajiado and Narok counties, where he has helped to maintain the Maasai culture through his music that also promotes traditional values that are highly cherished by the community.

The famous musician’s is an ever present fixture at almost all functions across Maasai land, especially at national platforms, where his energetic performance leaves the crowd pumped up dancing along.

But from his own testimony, the journey into stardom hast been struggle that has seen him battle the scourges of alcoholism, debauchery and poverty to rise and get to where he is today.

The musician who hails from Kajiado Central, Matapato North, Meto village did not attend school because his family did not value the importance of education.

The father of five relocated with his family to Samburu many years back after going through many challenges and animosity in his home County of Kajiado.

“Through music I have interacted with top leaders in the country after performing at big events such as Mashujaa Jamhuri day celebrations attended by President Uhuru Kenyatta, the latest being the 10th Mashujaa Day celebrations in Mombasa County in October this year, where I was recognized as a hero,” said Pakuo.

He attributes his challenges in life to failed marriages and the death of his son events he says pushed him into depression and alcoholism that almost ruined his life.

Pakuo first married in the year 1975 and got blessed with a child but his wife later died in 1983 forcing him to marry again in 1986.

He sired two children a boy and a girl with his second wife, but misfortune again struck when the son died in a road accident before he separated with his spouse in 1994.

Having seen two marriages collapse, the musician decided to take an 11 year period of soul searching before marrying again in 2005, only to get into another divorce due to infidelity.

Pakuo says his struggle in marriage pushed him to debauchery which made him sell his property and land that he had inherited to entertain women and to buy alcohol to forget what he had passed through.

He recounts that the situation became so bad to the point that at one time he even tried to end his life in a failed attempted suicide bid.

It reached a point where he became a social misfit who was rejected in the village before decided to abandon the wild behavior and embraced the teaching of the bible.

“I started attending church and that is where the idea of preaching the gospel hit my mind but because I did not know how to read and write I could only do so by praising Jesus through singing,” said Pakuo.

As he enjoyed life through his new passion, Pakuo found another woman, married and got blessed with two more children, bringing the number to five.

Some of his children are now adults but he takes care of the younger ones in a happy family as he continues preaching and singing at public functions.

He has also performed in to Italy and Tanzania.

He was selected by Mzalendo Kibunja, the former chairman of the National Cohesion and Integration Commission (NCIC) to sing during national events elevating him to hero status.

With a record of gospel 24 albums carrying more than a hundred and two traditional songs,  he has been recognized as an ambassador of peace in the country and awarded medals during Maa Awards ceremonies.

He has also entertained Narok governor Samuel Kuntai Ole Tunai and former Kajiado County governor Dr David Nkedianye, who had identified his talent and hired him to compose for him a song for his re-election campaign.

Pakuo says after composing the song he got a backlash from governor Joseph ole Lenku’s supporters and he has never been invited to perform in any county government events.

“They hire musicians from Tanzania and have never invited me for reasons that I do not know.  They do not like me but I only sang for Nkedianye to make a living but if there is something I did wrong I seek for forgiveness” he says.

Pakuo says Governor Lenku is doing a good job and he would wish to entertain him one day but he is enjoying life in Samburu, where he has become a legend.

The musician has now enrolled in in Ngumbaro classes and can now read the bible. He wants to operate a computer to travel all over the world and preach peace and fight deforestation.