Home / Uncategorized / Mau restoration to go on as planned: Tobiko 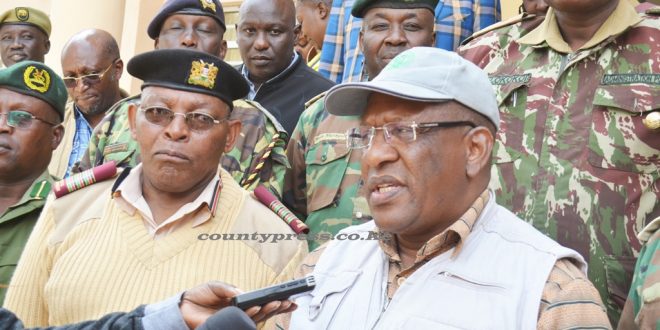 Narok County Commissioner Samuel Kimiti together with Cabinet Secretary Ministry for environment and forestry Keriako Tobiko during a meeting at the county commissioner office.Photo Bell Pere

Mau restoration to go on as planned: Tobiko

Environment and forestry Cabinet Secretary KeriakoTobiko   has stated that phase two of Mau forest restoration will not be up for discussion. This comes after the state cancelled over 1,200 title deeds.

The CS, during a meeting held at the County Commissioner’s office, clarified that the process would not be eviction but restoration as the land belonged to the state.

He claimed that the prolonged disputes had nothing to do with the law, but had been politicized by certain politicians.

“The Mau forest disputes that have been ongoing and have nothing to do with the law,” he noted.

He further reiterated that Mau forest is not about tribes and the restoration process would go on as planned by the relevant authorities.

“We do not care which tribe you come from or political party, Tangatanga or Kieleweke, restoration is now or never,” he said.

The phase one of the evictions that saw 10,000 illegal settlers evicted was centred in Reiya group ranch while the second phase has Nkoben, Ilmotiok and Ololunga on the radar. The others are Enokishomi, Enoosokon, Nkaroni and Sisian.

Rift Valley Regional Co-ordinator George Natembeya noted that they had already deployed sufficient personnel on the ground to carry out the process.

“We are ready for the second phase of the restoration. We have deployed sufficient personnel on the ground to carry out the activity,” he added.

The water towers restoration is estimated to affect over 10,000 people including an alleged 8,000 school going children and over 1,000 candidates set to sit their national exams.

Narok County Commissioner Samuel Kimiti urged residents to preserve forests and not to engage in burning charcoal and deforestation.

“Forests belong to the National Government and no day shall we allow a few individuals to benefit at the expense of others,” he further added.

Tobiko said that there was need to protect the environment that was under threat from human infestation, adding that the government was about to launch massive tree planting champagnes across the county. The campaigns involve primary and secondary schools and universities that will be required to plant at least 10% of the total land with trees.