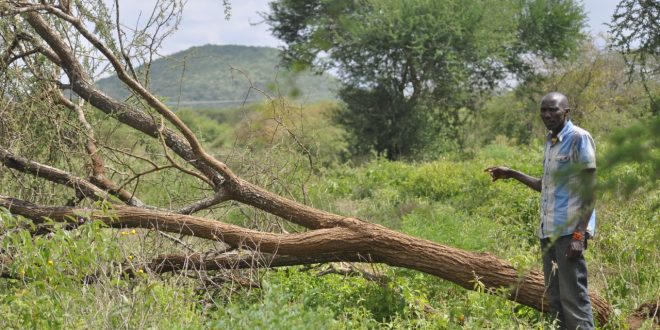 Masimba schools was closed few months ago after elephants attack

Straying elephant in Masimba area of Kajiado County has claimed another life after four of them raided a homestead.

The incident took place near Kiboko town after four elephants had strayed into a homestead in search of water.

According to the area chief, Daniel Kanchori, the head of the family was yet to arrive home at around 10 pm when his sons started chasing the elephants away.

“As they started beating tins and drums to scare the four elephants from the homestead, his two sons drove the beasts, unknowingly in the direction their father was coming from,” said Chief Kanchori.

Kanchori said the sound of tins irritates the elephants, and they must have sped off in anger only for one of them to trample on the old man.

“Only one of them decided to chase the old man for close to 150 metres before trampling on him, and killing him instantly,” he said on the phone.

The Kenya Wildlife Service head of problem animal unit, Vincent Ongwae, also confirmed the incident, and termed it “unfortunate thing that should not have happened”.

Ongwae, whose unit tackles wildlife/human conflicts issues in the entire country is based in Kiboko, Makueni County, denied claims attributed to the local elders that KWS does not respond to animals attacks.

“Let me, first of all, say what happened to the old man is unfortunate, and should not have happened. I received the report after 1o pm on Friday and immediately called Makindu police to take care of the dead body,” said Ongwae.

He said he assisted in the movement of the body to the mortuary in Makindu hospital mortuary.

“We always get these incidences and act immediately. The residents of those affected areas may be thinking that acting may mean we will wipe all the elephants in the area. This is not the case because they understand our rules of engagements,” said Ongwae in a telephone interview.

The area chief said that in the last 3 years, three people have been killed by elephants and scores of others injured.

“We have lost property that includes boreholes, open water pans, and water drums in our homesteads to elephants in this area. Our anger is pegged on the fact that our people are killed and property destroyed but no one has ever been compensated,” said Chief Kanchori.