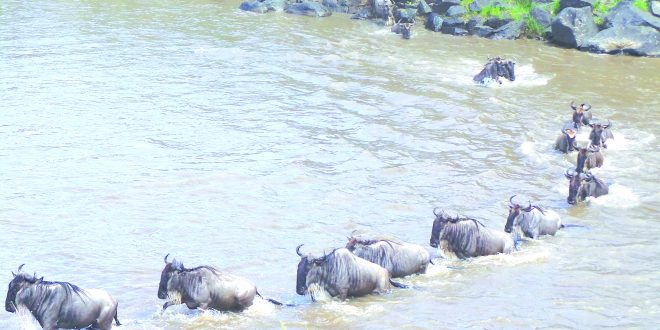 According the Wildlife Conservation Act 2013,  genuine victims of human/wildlife conflict have a right to seek compensation. This gives individuals a chance to claim compensation from County Wildlife Compensation Committee that has been put in place to ensure that people are compensated for loss of life, injury, or damage to property caused by wildlife.

The KWS officers are in charge of this cases whenever reported by the affected people. The amount also to be paid to the affected is determined by the committee who have a responsibility to market value the property destroyed or livestock killed.

In case of a death situation the Act says that the family to be compensated up to Sh5 million while in cases of injuries leading to permanent disability is paid Sh3 million and any other injury victim is paid ksh.2 million.

Therefore this has not been the case in Kajiado County, compensation of killed, maimed people and loss of livestock has been taking years.

The delay of compensation has been experienced in all parts of Kajiado County where aggrieved livestock owners have accused KWS officers of turning a deaf ear whenever they reported cases of losing their livestock to wildlife.

Kajiado West, Central and South are the most affected regions by this menace.  In kajiado central people from Namanga and Orgulului are mostly affected by the jumbos from Amboseli National Park same to the southern part of the county who also borders the National Park. During drought seasons the jumbos walks out of the park destroying people crops and sometimes causing death of livestock, people in the area. Kajiado west, Oltepesi area has mainly been affected by hyenas killing goats and sheep at night.

Residents of Oltepesi area in Kajiado West has accused KWS officers of ignorance claiming that they never take these reports seriously. Mostly Hyenas attack their livestock at night breaking into their homes.

Sources say that, in 2018 locals from the region estimated loss of 100 goats having value of Sh700 000. In 2016 at Kurket area, Kajiado central an Elephant caused death of a 28 years old youth. Former Governor David Nkedianye and area MP Memusi Ole Kanchory visited the family and promised them to follow up for compensation.

Sadi Ole Siana from Enkusero area said there has been an increase in cases of jumbos from Amboseli destroying their crops at night.

David Moile who is the youth leader at Iloodokilani says that KWS has no budget for compensation cases so that is the reason why they delay compensating farmers.

He asked County government leaders through MCA Jackson Ole Mpaada to fight for the rights of their people and ensure that all pending cases are compensated as soon as possible.

John Yiakon who is also an assistant chief at Namanga sub location said that the issue of wildlife attacks must be taken with the seriousness it deserves since people are suffering.

According to County senior warden Muteru Njauuni locals who are affected are the one not following the right procedure. “The law states very clearly that in case of wildlife attack, the incident should be reported to the nearest KWS office within 48 hours,” he said. Mr. Muteru maintained that the cases of hyenas attack at Oltepesi area, Kajiado west has never been reported to their office.