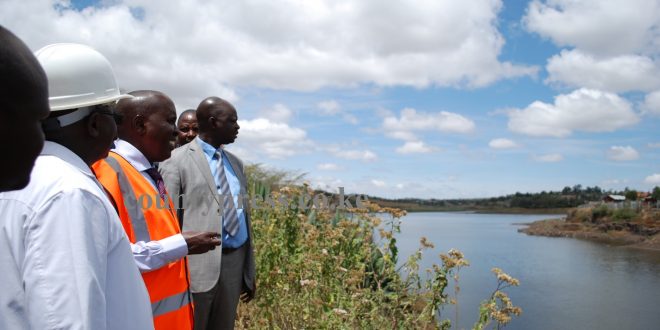 Lenku who visited Kiserian dam on Thursday was taken through damages the slaughterhouses have done to the dam, the waste from some of the slaughter houses is directed to the dam that supplies water to thousands of Ongata Rongai, Kiserian towns.

The governor furiously ordered the CEC member to ensure the issue is dealt with on Friday he said the slaughterhouses should be shutdown if they do not comply, he also instructed Ongata Rongai public health officer Joseph Waiyaki who had ushered him in opening Olekasasi Dispensary to ensure action is taken to people dumping waste in the dam.

For long some slaughterhouses have been diverting waste water to the dam, the dam which has been in news as one of the “white elephant” project by the national government, the government did not plan how to prevent dumping of waste in the dam before constructing the sh1 billion dam.

Water CEC Member Michael Semera said if the involved slaughterhouses will not comply by next week they will be closed , he said water consumed by locals is treated.

The dam is managed by troubled Oloolaiser Water Company it has been affected by siltation and encroachment.

MCA Mwathi Pere said the firm should be investigated on why they have not been able to pay electricity bills, power was switched off for a week with locals going without water before it was restored on Wednesday.

Lenku had toured the Kajiado North and West before commissioning Olekasasi Health Centre in Rongai Ward, he was accompanied by executive members and members of county assembly.