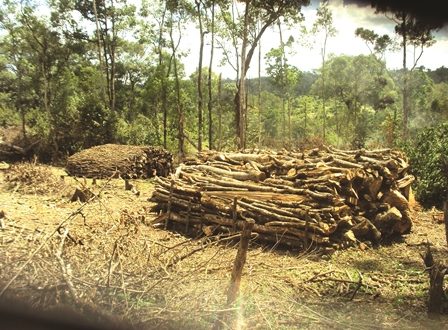 Trees that have been cut down at Nyakweri forest in Trans Mara.

Pastoralists illegally grazing their livestock in three key forests in Narok have been warned against invading the water towers in a bid to allow regeneration of the depleted forests.

Area Kenya Forest Services (KFS)Ecosystem Conservator Mwai Muraguri announced that they have outlawed the grazing of livestock in Mau, Olposimoru and Nyakweri forests this rainy season to boost vegetation cover.

Mr Muraguri said since the government placed the moratorium on logging in community and government forests last year,over 12,000 acres of the Maasai Mau forests that had been destroyed have been recovered.

“As Narok we have now surpassed the nationally projected forest cover of 10 percent as we are now at 16.7 percent.We are targeting at least 20 percent by the end of 2020 and livestock grazing is a threat to achieving this that is why we have subsequently banned grazing in these forests ,”he said.

He attributed the increased forest cover to the multi-agency operation mooted September last year dubbed “Operation Okoa Maasai Mau” that saw over 10,000 illegal settlers flushed out of Kosia and Nkareta areas of the Maasai Mau.

The KFS official also said that the Nyakweri forest which is the elephants breeding forest that had been destroyed by illegal loggers and charcoal burners has also been recovered through the regular patrols by the KFS,KWS and Kenya Police officers.

He said the gains of conservation has already been seen in the last one year with water levels in the Mara River which is the lifeline to the world-famous Masai Mara Game Reserve have gone up prompting early migration of the annual wildebeests migration which has already kicked off.

Mr Muraguri has however asked the locals to plant trees in their private lands said that forests alone will not boost the country’s forest cover.

“If everybody plants at least 64 trees in his or her individual land them we can easily attain the forest cover very easily. By planting trees also means that the concerned residents will not have to invade forests to get firewood, timber or poles as they will be harvesting in their own farms,”urged the conservator.