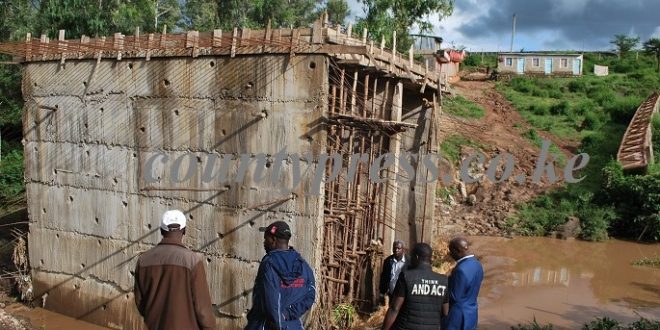 Ongata Rongai Olekasasi bridge , where a girl was swept to death by river .Photo Obegi Malack

A form three girl was on Tuesday swept to her death by Olekasasi river in Ongata Rongai ward, Kajiado North Constituency.

The girl was crossing to her home in the early hours of Tuesday morning with her sister when she got swept away by the killer river.

According to an eyewitness the river was flooded and the two had tried to help each other in crossing.

“She has been helping people cross the river since there is no bridge, she gives directions on how her colleagues should do,” said Catherine, a Rongai resident.

The resident said the sister had held her hand but was overcome by the force of the waters, she tried to alert her father and members of the public but it was too late. She watched helplessly as the sister got swept away.

Joshua Mutuku deceased’s father said he was alerted and tried to rescue her but it was too late .

Her body was finally recovered several miles downstream 8 hours after a prolonged search.

Residents said they have been complaining to the County Government of Kajiado on the state of the Ole kasasi bridge for more than a year now. A contractor had removed the old footpath bridge and was construction a modern one.

Area MCA Mwathi Pere said the contractor was supposed to finish the work on July, 2019.

He said he has been raising issue with the contractor and concerned department but nothing has so far been done.

“I have been asking the concerned department to cancel the tender since the contractor has taken too long and it seems is not capable of doing the work they are yet to respond,” he said.

Rongai Politician Abdi Hassan said the contractor should take responsibility and action must be taken.

Last year the same river swept away seven people after Kandisi bridge collapsed, demonstrations were held in the town but the Kandisi bridge is yet to be fixed 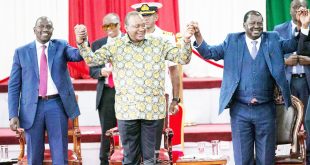 BBI: Up resource allocation to counties to 35 per cent