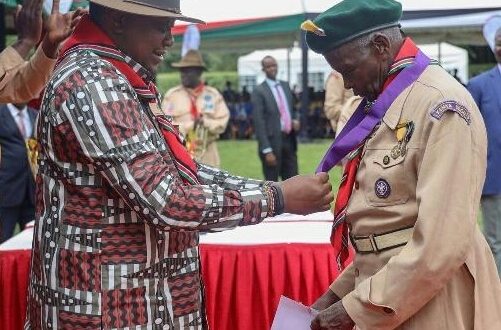 He has been honoured with some of the utmost medals and merits in Kenya for having bled for the country before and since independence, with the recent one Silver Lion Medal (SLM) awarded for “Distinguished service and exceptional character in the Scout movement” by His Excellency Uhuru  Kenyatta.

Perhaps many only have the slightest idea of the medals and merits, but no clue of the specific deeds done by him during and after his years in power.

The man is Philip Toikan Ole Lemein or famously known as “Mr. Senator Sir!” Even in his 90s his gaze is filled with youthfulness and joy.

“I later joined Kapsaket Teachers Training College in 1942. Where I met and studied with the former President Daniel arap Moi but my studies were cut short by the effects of Second World War,” he grimly reminisces.

His desire for education did not die but later on he joined Kahuhia Teachers College Murang’a in 1947 to1948 where he earned a P4 certificate and was recruited into Scout movement by his European Teacher, Mr Hooper who was then Scout Commissioner, a service he has practised to date.

“Mr Hooper whom I can’t really forget influenced me into joining the scout movement which later on immensely transformed my life,” he added.

During his active years in politics, Lemein had a passion for the schools in Narok and he thus started off by allocating and sorting out lands for schools. Among the first beneficiaries were Ilmashariani Primary School, and 40 hectares given to Ole Tipis Girls secondary school – Now a National school in Narok County.

“They elected me to become the 1st Narok District treasurer for the party. It also gave me an opportunity to host President Moi at my home,” he recalls.

He later on joined a delegation to Lancaster House Conference in London in 1962, where he was tasked in the drafting  of the first Kenyan constitution that led to Independence and Formation of the senate (upper house), Parliament (lower house) Majimbo –  Districts (currently county government) local Government- (currently ward).

“My stay there completely changed my character as I mingled with Kenya’s first president Mzee Jomo Kenyatta and other prominent nationalists such as Tom Mboya,” he added.

At one point during the delegation, Mzee Lemein further recalls with pride walking out of the Lancaster house conference, he and the other Maasai leaders in the delegation under the Maasai United front (MUF) a party that brought together Maasai leaders from Narok, Kajiado and Samburu districts, in protest due to disagreement on Maasai land issues based on the famous Olonana land agreement of 1912-1914.

On returning from Lancaster house conference, Philip Lemein was elected as the first Senator for Narok District from 1963 to 1966 before the senate was abolished.

He was later elected as the 1st Member of Parliament for the newly created Narok South constituencey and served from1966 to1969.

He was able to achieve quite a number of notable accomplishments such as the 1st Narok – Mai Mahiu Tarmac Road , Introduced the 1st cattle dip in Narok at Loita, Naikarra, Majimoto and Siapei Locations, initiated the introduction of wheat Farming in Ildamat, Olchorro and Upper Melili, moved a motion in Parliament for the introduction of Narok Post Office that is operational to date, advocated the formation of District Land Adjudication and introduced the first Water Pump Project for Mosiro and Morijo locations.

He continued serving as MP for the next three years but later on moved to Narok North where he lived and no longer found it fit to represent in an area where he was not a resident.

“I wanted to contest in Narok North but the then friend of mine Daniel Moi, contacted me not to challenge Tipis who was then a powerful minister in the office of the president,” he pompously added.

Mzee Phillip has been staunch Christian principled and led by church guidelines and for that he donated land for building Light Christian Fellowship Church and Nursery school in 2003.

In the community, he started the Narok village Polytechnic in 1965, now Narok Vocational and Training centre, was appointed to Land Dispute Tribunal (1994-2004) and served as chairman, Narok District Peace Committee 2002-2004. He also served as secretary and was awarded Head of State Commendation (HSC – Highest civilian Honour) by His Excellency former president Mwai Kibakiand. He also donated land for water Pump Project that is currently serving the residents of Lenana, Fanaka and Osinoni people.

“I remember with the growing population of residents in Narok, water was becoming an issue and, therefore, as a community leader we had to seek a solution to it. We mobilized resources and drilled a borehole that is still used to date,” he added.

Mzee Ole Lemein has been recognized and awarded various medals and merits that include; medal of merits, awarded for “outstanding services In the scout movement” by the first President of the Republic of Kenya MzeeJomo Kenyatta (1968); Long service decoration, awarded for “faithful and efficient services to the scout movement,” the second President of the Republic of Kenya, His Excellency  Daniel Toroitich Arap Moi; Acceptation of pilgrimage, awarded in Jerusalem Israel by the minister of Tourism, Trade and Industry in (1988); Freedom of the city of Nairobi “Honorary  award” By His worship the Mayor of Nairobi, Dick Wathika (2006); Head of state commendation (HSC) “Highest civilian division honour”  for his service in the District Peace Committee, Medal awarded by  former president Mwai Kibaki in (2012), an honorary service by his church on 29 April 2018 for exemplary leadership (2018). A resourse and employment centre was started in his honour  to train youth and women in the community and he was awarded the recent Silver Lion Medal for “Distinguished service and exceptional character in the scout movement”,By His Excellency Uhuru Kenyatta on 24,November 2019.

A parting shot from Mzee Lemein is that the only way to move the country forward is to fight corruption from the top Government officials. He has also lauded the new Building Bridges Initiative that it will try to close the loopholes within the government used to syphon public funds.