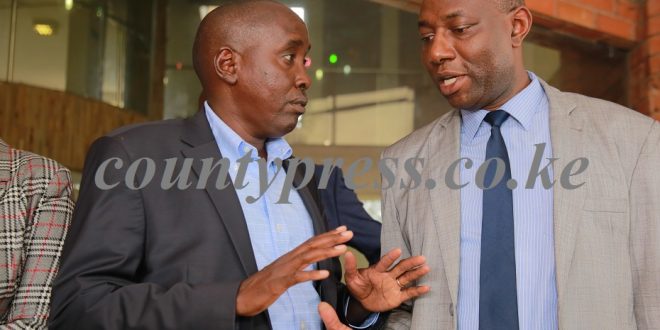 A hand over of the responsibility to supply fresh water to Kitengela residents from the Export Processing Zone Authority (EPZA) to the County Government of Kajiado has started in earnest.

The process to have the EPZA relinquish its disputed water pipeline to the devolved unit was first broached by Governor Joseph ole Lenku last year with President Kenyatta backing the idea when he addressed the public in Kitengela several months ago.

Over the years EPZA-in Mavoko, Machakos County- has been supplying fresh water to Kitengela residents in Kajiado county.

Recently, the Governor led a high powered delegation of senior County staff for a marathon meeting with the top management of EPZA led by Acting Managing director George Makateto.

The new development will be a big relief to thousands thirsty residents of Kitengela and its environs following years of consumption of salty water that they obtained at exorbitantly charges from some vendors.

The EPZ pipeline which draws its water from Nairobi Water and Sewerage Company (NWSC) is one of the few sources of fresh water in the rapidly growing town. Other source of water is from Nolturesh Loitokitok but which bypasses Kitengela to supply  the commodity to former vice president and  the then larger Kajiado North MP late George Saitoti Enkasiti farm.

It beats logic how the pipeline bypassed the populous Kitengela town that has transformed to a business hub among most Kajiado satellites towns.

Accompanied by his Water  and Health Services CECM Michael Semera and Esther Somoire, Governor Lenku confirmed that the journey to take over the water supply had kicked off in earnest.

“We met with the EPZ board in an early negotiations on how EPZ management will hand over the pipeline after President Uhuru directive early last year. We are optimistic the talks will bear fruit  and relief our people pain searching for water,’’ said Governor Lenku after the first meeting.

“EPZ source water from Nairobi Water Company and its prudent for both parties to understand the structure of existing waterline. We are not against Kitengela residents getting water but right procedures must be followed,” noted Makateto.

Kitengela people have been paying Sh 50 to 80 per 20 litre jerrican of fresh water from vendors.

Earlier this year, the National government in partnership with Kajiado county government sought to reduce the cost of water per jerrican of water to Sh3 by earmarking 8 spots for the construction of water kiosks. At least three of these kiosks are already functioning and are selling the rationed water at Sh3.