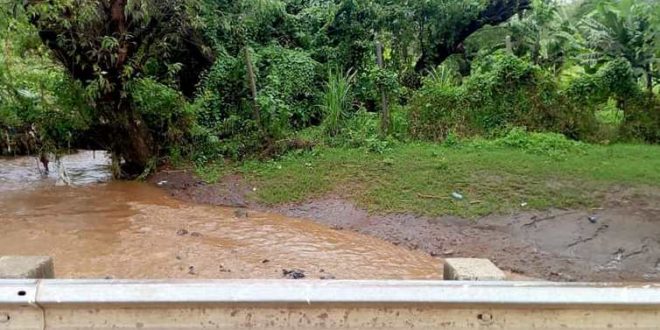 Kiserian Magadi Junction bridge , where two people were swept away by floods

A bodaboda rider and his passenger were on Tuesday night swept away by flood in Kiserian, Kajiado West Constituency.

The two were trying to cross flooded bridge on Magadi Kiserian junction which is few metres from the town.

Kiserian Bodaboda chair Joseph Mwangi said he received the report on Wednesday morning and is suspending his meetings to follow up on the issue.

The search for the two has started, a number of people have died during rainy seasons trying to cross the killer bridge.

The incident happened few hours after another school girl died after swept away by flooded Olekasasi river in Rongai Ward.

The girl was crossing the river in the early hours of Tuesday morning with her sister when she got swept away by the river.

Last week five people from the same family also died after the vehicle they were in was swept away by flash floods at Ng’atataek area Kajiado Central.