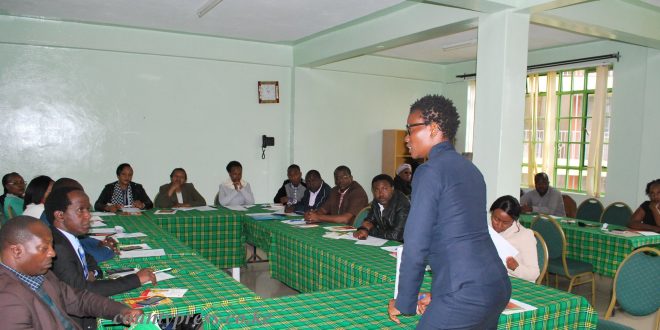 FODDAJ Project Coordinator Julian Nekesa during a workshop in Ngong, she said cases of defilement have increased .Photo Obegi Malack

Community Based Organization, Forum for Women in Development, Democracy and Justice (FODDAJ) has raised alarm over increase of defilement cases in Kajiado County.

FODDAJ Project Co-ordinator Julian Nekesa said the cases are reported but perpetrators released. She said it is affecting poor families since they have no money to follow up such matters.

She said the organization has been supporting families whose children have been defiled to get justice. Many of the perpetrators threaten the families others give money to drop the cases.

“We have witnessed many cases, investigations are shoddy since perpetrators are released,” she said.

She was speaking during a government officials and women empowerment supporters workshop in Ngong .

Last month three cases of defilement were recorded. In the latest saddening case a policeman was charged for allegedly defiling a class eight KCPE candidate in Ngong.

The organization director Nancy Sitima said they are working with indigenous communities in Kenya to promote education and social and economic well-being of women and girls.

The organisation wants to eliminate harmful cultural practices such as early or forced marriages, Female Genital Mutilation and domestic violence that prevent the advancement and general well-being of women and girls.

Isaac Manyonke an official of National Council for Persons with disabilities (NCPWD) in Kajiado said persons  living with disability should sensitized on their rights to eliminate GB.

Susan Mwongeli Ongata Rongai division assistant county commissioner said the boy-child has been left behind and more should be done to rescue him. She urged the organizations to hold more meetings to educate the community.